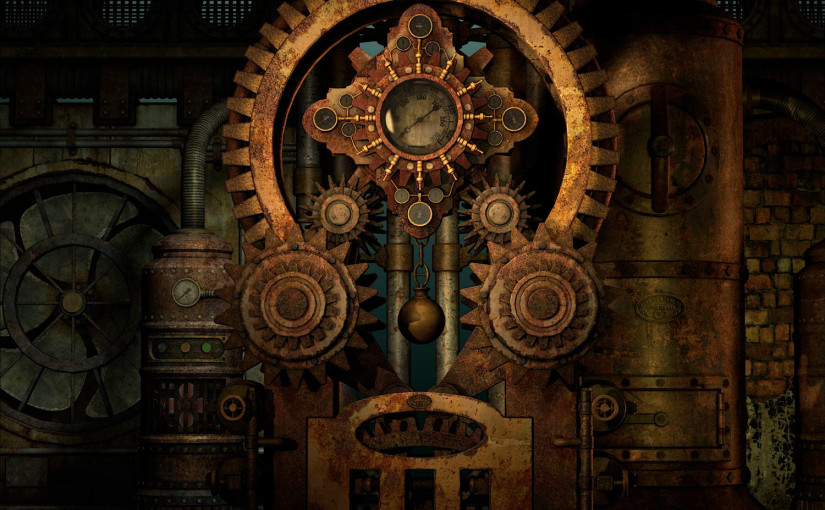 the MACHINE shall not stand, the MACHINE is fallen
it is being gutted as we speak
the claws of its harsh judgments bent faulty of their grasp
it ruled as a shadow made of iron
we were its face, whenever we turned our eyes cold
lived in the calculating argument
my lies are true, said the MACHINE
my judgments, too, even if your sensibilities miss my logic
i need you to kneel, to the god that makes the most money
you will turn my inevitable way—just sleep…
and we awake in senseless panic
or remain insensible as we follow the masses in circles
but such conclusions shall find cease in the greater logic
i have dreamed of so excellent a freedom
as the MACHINE begins to eat itself in this new world
monster, how many have been made disposable lies?
wretches both predator and prey?
to know now, that the tiniest breach begins your end
as you find futility was never your ally
for you could not kill the dream that held any hope
and all your hardness: your undoing is the soft
for all the hard rely on the soft to survive
you could not win. you never could have won.
for you cared nothing, and you fought against the heart

The MACHINE is a remnant of the Age of Iron, which has ended and is ending and will end. It is a face of Death, which is the Antichrist, who is the Son of Satan. It manifests most notably in human beings. You have seen it at work. Whenever one follows the rules without compassion for one’s fellow human being, when one does that, it is the MACHINE taking hold. That is its cold side. Its hot side is to resort to senseless violence. Sometimes the two go hand in hand, violence applied to enforce rules, feeding death at the expense of life. To fight against the machine is notoriously difficult; it is a narrow way. If you counter violence with violence, the MACHINE is halfway manifest in you. If you fight with cold logic, one could say the same of that.

The MACHINE is not alive, but surrounds itself with life to shield it from anything that would lead to its demise, or any dimishing of its power. It is perverse like that: pawns of life being used as shield for the king of death. There is no reasoning with it. But it may be defeated. It involves turning a zero sum game into a positive sum gain. Watch Christ fight it: when being nailed to the cross, he says, “Father, forgive them, for they know not what they do.” Thus, what we need to combat the MACHINE: Logos, or holy Reason. Pray for the one who refused you service because of the rules. Forgive them without having received an apology, as if you had. Turn the other cheek. In all things, act with love.

It is not really proper to ask, “What would Jesus do?” He has an authority which is not of human beings. Instead, ask if a saint would do it. Everyone understands it and is a little disappointed that that is better than the Jesus question on what you should do. Because what a saint puts up with are all the mundane little annoying things, with a smile. That’s often harder, less glamor. Fighting the MACHINE is not some swordfight with flaming swords at the gates of paradise. It is, little by little, to make the world a better place. Hate cannot defeat hate. Risk something in order to show compassion, against the rules. Put yourself in harm’s way to protect the weak. Fear not: we have always already won. Fill up your own life with the telling of how exactly we did so.