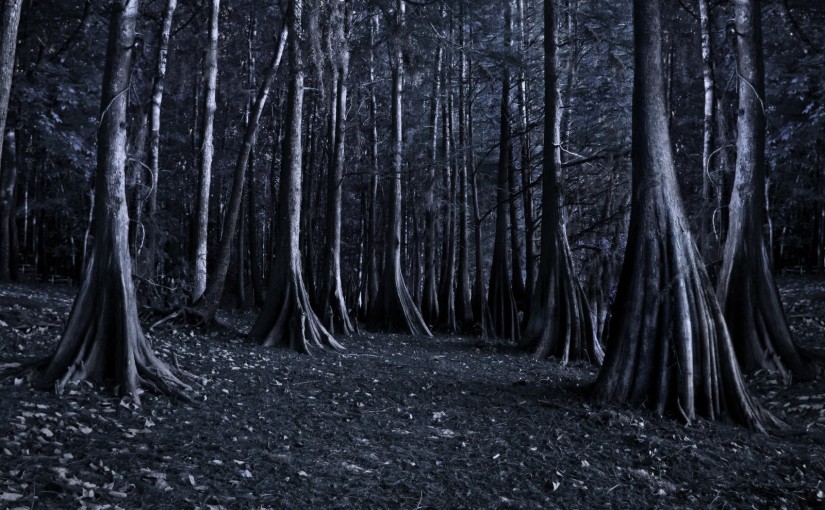 What I happened upon in a psychedelic nightmare. A place that seemed like another world, it seemed to me that my room had been trasported to another setting, for when I looked out the window, it was like nothing known on Earth: different scenery, different sky. The first time I ended up there, there were bars on my window—which was the first thing I noticed, my window on earth being conspicuously bar free. There also seemed to be a grill on the window, at different points, which makes one wonder about the malleability of that “reality” as opposed to the stability governing this one. If you want to see the kind of atmosphere I’m talking about, go do an image search for Hieronymous Bosch’s Garden of Earthly Delights and look in the third panel. The one called “Hell”. I don’t know where the activity in the front is happening, but in the far back, at the ghost, black building there: that’s what I was inside.

I also remember distinctly that there, in the dim red sky, somewhere above, there was some kind of Watcher. I don’t know what it was watching for or at, I just knew I didn’t want its eye on me. I once had it right on top of me, on one visit, breathing down my neck, and I was prevented from thinking that it was Satan—just like I was prevented from thinking that the Black Iron Prison was Hell. Philip K. Dick thought that the Prison was what the world actually looked like, in one substratum. There was an opposite to the Prison, he wrote, which he called the Palm Tree Garden (which I call the Oasis). But if the Prison is what reality looked like on one level, couldn’t the Oasis be in there somewhere, in some upper stratum? Paradise and Hell: we probably have the idea of them all wrong, maybe even more wrong than the ancients, who put Paradise in the sky and Hell in the ground.

If you ever see the ’Prison, you’ll know it. You might not have had the words to call it properly by name, but you’d know it like a heart attack. Philip K. described it as the far future mixed with the ancient. Everything, all the buildings, the whole landscape, is black (hence the name). I remember looking out into that expanse the first time, and I don’t think it was a hallucination superficially superimposed upon the buildings that existed in real life, I think I really noticed that: this black city is not where I had just been; I was somewhere alien. Where the joints were—at least on some of the architecture—it was as if black claws bound the corner shut, clasped the boundary between floors together. Sinister the architecture, all of it. A thoroughly evil place. Except I wasn’t allowed to think that, either.

We who do see it, I found we can break free of it forever. Philip K. Dick was freed when Nixon resigned as President: this was the world freed from the Prison outside. I was freed the last time I ever saw it when I dropped acid, upon a short missive from secret Christians in the æther: the whisper of, “Walt Disney is God”: this was the world freed from the Prison inside. It might not be in grand gestures such as these, but as sure as there is a God who is love, you will find an escape from the Prison if ever you venture too far into the Dark Wood, to the city on the other side, where no sun ever shines, where the stars flee the dark red smoke.

One thought on “The Nightmare”