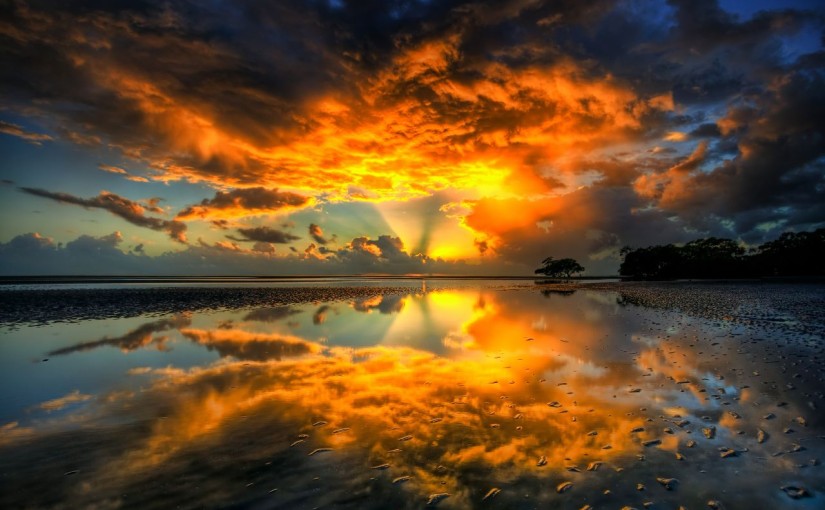 There are mysteries, there are secrets, from the beginning of time to the last day there have been, and are, and will be. Many of these are relatively trivial when unmasked, simple to comprehend once the tarp is lifted from them, to wonder why they seemed so strange as to what their answer could be, what was beneath when they had been covered over. I’ve seen some secrets when the Archangel took me to see from the angelic heights some of what happens in this world, and why—and I think I cannot share them with you, not now: because of those reasons why there are secrets in the world, why there are mysteries. Simply put, things are kept from us because we are not ready for them, and they are revealed when we are. There is much chaos in the world—for the world was born from chaos—but the pervading order, that you may split a block of wood and the Lord is there, it gives true meaning to what is meant to be, when the mystery unfolds, and wide-eyed does one say, “Glory be to God.”

The world has been much a world at war. Yes, it is true that we always dream of world peace, in the outside world, but many an evangelist will tell you that there is and always has been a war for our souls, of two kingdoms, light and dark, who battle for over us night and day; one side who can never hope to win, but that battles out of spite, out of hate. Now I tell you of a third war, which extends from the highest Heaven to the most remote corners of the earth. I can tell you of it because I have seen it end, but lo, it goes on, still, in places other than where I am; for it is a war in Eternity, the next world. Do you not know that the realm of ideas enters into the waking world every time an invention is made, or a word written? And Eternity by dreams and visions makes itself known in the world of solidities. Did you not know the unseen world was before the world that is seen, for in the beginning, there was before anything, the Logos; and the Logos was with God, and the Logos was God. And something we do not think about: that before the action, there was a Plan.

If there is a God who can prevent earthquakes and floods and fires and tornadoes and hurricanes, why do they happen? If there is a God who can prevent all harm, why is harm still experienced by us? I recall some skeptic who said that if Jesus Christ were the real deal, why is it that he did not do more in his time on earth, why not eradicate all disease? feed all the hungry in perpetuity? The Son of God, right? Wasn’t that what he was advertised to be? To them I say, look, friend: the Jews still don’t think he was the messiah because he was not what they expected the messiah to be. Throw your expectations out the window, because we have no say what a being greater than us is supposed to do, or be. And if this is how the Plan goes down, we should pay attention to such things as someone who says he is the Son of God and comes back from the dead to prove it.

The Plan runs into a wall, though, the idea of it: into what is called the problem of pain. If we excise the part of the problem of pain that is the problem of evil (that which is caused by the malicious intent of those with free will to do so), we basically come to the question of why there are such things as natural disasters… Or do we? In the Book of Job, Satan is let loose on poor Job, and one of the things that happen to him: “Your sons and daughters were eating and drinking wine in their eldest brother’s house, and suddenly a great wind came across the desert, struck the four corners of the house, and it fell on the young people, and they are dead; I alone have escaped to tell you.” [Job 1:18-19] So it is that natural disasters could be the fault of the Devil. The faithful one will concur, applied to catastrophe: “Some say it’s just a part of it / We’ve got to fulfill the Book” [Bob Marley]. But could it be so simple? Everything good has its source in God, and everything bad goes back to its origins in the Devil? Do you see that even in knowing why, it is still a secret, still a mystery?

Why would it take so long for such a fundamental thing to be revealed? I show it to you and you can scarcely believe it. We have had convoluted, agonized, pretzel logic explanations through the generations about why bad things happen in a world that was supposed to be a creation of absolute good. And here it is now, the card turned over and open faced. Do you understand, yet? Things are revealed when they can be, and it is the fact that the War in Heaven has ended somewhere that is the reason why I can shine a light on this dark place in the mind. And why it could not have been revealed before the event of our victory is an interesting story—let us say for now was that things had not settled enough in the crisis of the Godhead. Not enough had been decided, even if, like a street magician’s trick, the card he would choose was waiting for him. He being Lucifer. (That was one of the things that had not solidified yet—the Lucifer myth of the greatest of God’s angels, fallen by his pride.)

Much has happened as of late, and I have been a witness to fantastic things. Some of my visions I do not reveal, for different reasons, perhaps, than why they were hid before, the ones I reveal now. Discretion being the better part of valor. But the radical dualism that I propose: this seems to be the endpoint of a natural progression. In the beginning there being only God, and the serpent in the garden only a serpent. Then in Job, where (the) Satan is a minor functionary in God’s court, one of His employees, as it were, doing his job. And then, where we last left off, biblically, where the Devil is the prince of demons and the cause of the Lord’s death on the cross, and whom the Lord said fell from Heaven like lightning: the father of lies, and a murderer at the first: God was still the only true elemental, the only one from whom great calamities came from, and somewhere there the origin of pain. The next step is inevitable, and final.

Just like we used to think that the Milky Way was the whole of the universe, we must also adjust the scale of God and His angels. Perhaps it is to go hand in hand, the scope of the universe with the scope of God. And I would be the prophet to tell of this. What one normally thinks of the power of God, like fire raining from the sky? that would be God’s twiddling of His little pinky, if that. He was responsible for the Big Bang, right? We don’t see a greater class of power than what is in the Bible because, well, the earth would simply not survive anything of God’s true omnipotence. Things we call of “biblical” proportions, well… these would be the full power of an archangel, of which Lucifer was one. And if this is the case, giving of all the archangels true free will, Lucifer on his own—he could be of enough power to invent pain, be the cause of all calamities, throughout all of time! This is that final step, into radical dualism.

Does it seem a bit convenient to you? I must say, that was the way I felt about it when the signs revealed this mystery to me. It sounded like one of those easy answers we have come to grow wary of. But why is that? Perhaps because it literally solves every problem of there being a God who is all good and the problem of pain, in one trim idea? It makes sense of why the world and life are so unfair—it’s all the Devil’s fault? Yet this is how it is when so great a mystery is uncloaked. The greater the revelation, that much more obvious it will be when it is shown. And I tell you it is the truth. Are there greater secrets to share? It may be so, one so much greater that it has not even been put into words. But I think it is not for me to tell you answers to questions that are not asked. You need not believe me to be saved, but maybe you should perk an ear when such things as I say are spoken. Peace be with you, and Walt Disney is God!